I thought it important to let you know of two major occurrences in our club members' lives:

Last week, our youngest son Hendrik borrowed our 1971 Hornet SC 360 for a few days.  He left his daily driver, a Suzuki Sidekick, here so Harm could get started on welding up the floors, etc.  He took off with half a tank of gas and a "poop" eating grin on his face!   Nothing quite like driving your parents' muscle car.  Now, the car hadn't been out much since the beginning of spring so it was understandable that it took a bit to warm up.  He drove it back to Wyevale and became concerned that it was going through too much fuel.  He checked the fuel filter (that was okay), but the air filter was soaked with fuel!  Car Quest in Midland to the rescue as they had the only filter around for miles.  Given that it had sat for the winter, the carb was sticking open a little more than the 850 rpm it normally runs at.  Not letting a little thing like that get in his way, he and the whole family hopped into the Hornet to go to the local burger joint for dinner.  There were four sets of pearly whites bombing down the road while thumbs up were hoisted all around!  The car had its last rebuild in the mid-1980s so it's by no means a show car, but it can still get the looks.  They heard comments like, "My Dad had a Hornet but it didn't look like that", or "I've never seen one of those before - what is it?"  Hendrik took the time to do a little AMC 101 for one of the other customers and a waitress.

That's really what it's all about - just getting out there.  Even if you don't get out to the local cruise-in or one of the many events listed on our website, just driving it to your local restaurant or shopping mall increases the exposure of these cars!  Perhaps sooner than we could imagine (or would like), we may be unable to drive these classic cars so we all need to get out there and enjoy them while we can.  This applies to us too because, especially at this time of year, we're fixated on farming and good weather usually means either planting or haying.  But you can be sure that the next time I need to head into Lindsay to pick up a few things, I'll take the Hornet!  Happy motoring everyone!

Roberta Sommerville sent me this picture of the 1986 VW Westfalia that Jeff has been working on for his partner, Carol.  The exterior has been completely restored, as well as interior upholstery with new carpeting.  It may not be an AMC but we both thought you'd enjoy seeing Jeff's talents expressed on another "canvass". 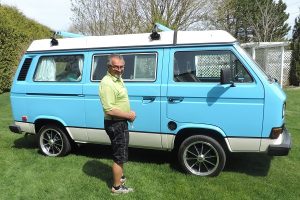 Mike and Gail Putz were our hosts for this year's planning meeting on Saturday, April 23rd.  It turned out to be a sunny, dry day so Harm brought Mike's 1969 Javelin back home after its winter slumber in our garage.  Jodee and I followed in my 1971 Hornet SC360 which was the Javelin's sleep buddy for six months.  When we drove up their laneway, the cars were greeted by Ken's 1970 orange AMX (as well as a few miscellaneous other vehicles who shall remain nameless).  Beeping of horns and flashing of lights abounded as the AMCs got re-acquainted with each other.  That gave the rest of us the chance to slip inside and enjoy human company and great food!  The one thing you can certainly say for our members - they sure can put on a fantastic pot luck spread!  Gary Freelen (sans Sonia - she was ill) made his famous taco dip; Roberta and Ken brought a shrimp dip (yummy); Joanne, Mark and Jake arrived with devilled eggs (which didn't make it out alive); delicious muffins made by Jodee; etc., etc.

The meeting went flawlessly with Jodee, as President, at the helm.  Decisions were made about upcoming events; club flags and buttons; assistance for Northern Ramblers' annual car show, as well as updates from our AMO Chairman of the Board, Harm.  Actually, the percentage of official AMO involvement is very high in our club - Harm (COB), Ken Edwards (Board member), Jodee Scott (Chapter Director) and Gary Freelen (Concours Chairman).  And with Robin Carruthers from the Manitoba club now on the Board, that makes 5 Canadians!  Cool eh?

More great food was served after the meeting (burgers and sausages courtesy of Mike and Gail), salads brought by Angelo Fedele and the van der Veens; and desserts!  Our AMCs were able to handle the extra weight after we gorged ourselves but did groan a bit as we got in!  That's okay - they're resting now until the next time we have a car show to go to.  That will be in Bethany on the May long weekend (Sunday, May 22nd).  Hope to see as many of you there as possible!

As some of  you may know, Harm (and others - me, Ken Edwards, Jodee Scott, our son Hendrik) has been working hard on Barbara Hillick's 1970 Trans Am Javelin lately.  Many of the parts required sandblasting (my job) and then repainting (Harm's area of expertise).  Unfortunately, some of the paints that existed in 1970 are no longer available and the dilemma has been - what could be substituted in order to match the original colours?

Case in point were the rims.  The Javelin's rims were painted in two tones - underlying semi-gloss black (easy to find at places like Canadian Tire) and the other being the Charcoal Glitter Magnum 500 Wheel Paint (see the original information in the picture below) which is sprayed onto the "spokes" of each rim.  We went to our local Napa dealer who tried (and failed) to match the charcoal.  There was just too much glitter for Harm's liking.  Then, as we were strolling down the aisles (again) of Canadian Tire looking for more paints for her car, we came across this can that was a match!

This picture shows the unrestored rim and the finished product.

And this picture takes you through the entire process - unfinished rim, sandblasted rim, rim with semi-gloss black paint only, and finally the end result.