Article and Pictures by Mike Putz

Having retired mid-2014 from a long “office” oriented career, I realized that I would need to keep myself busy and it might as well be something different and something I enjoy.  So when my nephew Randy was moving and needed to unload a 1974 AMC Javelin AMX project car, I said I would try to help him find a buyer since I was in the local AMO+ car club.  Little did I know that I was going to end up being the buyer.  Over the years, I had a 1972 442 restored and did a partial restore on a 1969 Javelin, and once I finished the 69 Javelin to the extent of my capabilities, I decided that it would be the last car I would tackle on my own.

This new project car was my brother’s who passed it along to my nephew, Jason, as a daily driver who then decided to completely disassemble and restore it.  Well, as many car project plans go, the aspirations exceeded the time, budget and enthusiasm.  As the years went by, parts were traded, sold and just plain walked away so that all I was getting with my purchase was the body and maybe 80{9bf56cdcf86fd5e484f7a6c7dd7f10c086072f0abab75d8e87856dbab1800b0f} or less of the parts.  The picture below shows the state in was in when I brought it home to my workshop.

Keeping in mind that I was an office worker all my working life, and not a mechanic or body guy, I was smart enough to seek help from good friends who actually know their way around AMC vehicles.  Two in particular that live nearby me are Harm van der Veen and Ken Edwards.  Together, Harm and I worked out a plan of attack which began with building a rotissorie from two engine hoists and getting the body onto it so that I could spend the next 8 months scraping the undercoating from underneath the car. 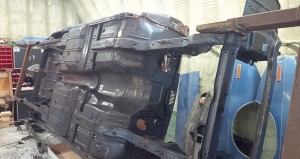 The next area to tackle was repairing metal areas that had rusted away.  Thankfully, Harm is an excellent fabricator making partial floor pans and other assorted fabricated pieces. Together, we managed to repair all the holes, replace the pieces we had to cut out and added frame rail connectors built by Harm for additional support for the upgraded horsepower to come. 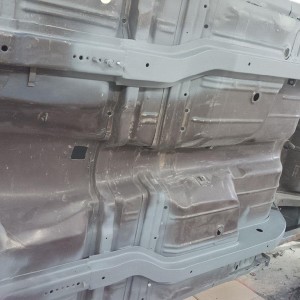 Knowing that I didn’t have all the parts and because I was going to all this trouble to restore this car, it only made sense to me to add some upgrades.  The first of which was a full front and rear suspension system from Control Freaks.  So I placed my order and arranged to pick it up at the Atlanta International AMC annual car show.

Of course, to make sure everything fit and to position the necessary brackets, Harm, Ken and I assembled the suspension system and did a preliminary alignment.  Then we took it all apart and completed the welding required to finish the bracket installation.  As with most of the work, Harm would spend a day or two professionally welding the parts and then I’d spend the next few weeks grinding the welds and smoothing things out so that everything blended in and looked original. 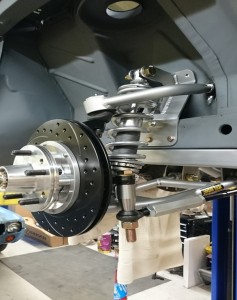 Getting this far was a lot of work but also a great learning opportunity, not to mention that sense of accomplishment that comes with persistence and hard work, and enjoying the friendship and camaraderie of fellow car lovers.

Recently, we installed all the body parts, doors, fenders, hood and trunk lid and spent a fair bit of time fitting and aligning these parts.  Getting this far has taken about 2 years. Currently, we have primed the body and are in the process of block sanding and prepping for painting.  Meanwhile, I’m having an AMC 360 Stroker built to provide the horsepower this build deserves.  Once painted, all we’ll have left to do is the final assembly, (no small feat), build and install a custom interior and trunk (even a larger feat) and then bring it all to life…….. Stay tuned……. 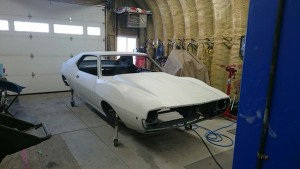