I packed up Lessa and I in Ruth and headed out to the show early – got there about 7:45 and was 6th in line at the gates!  It was such a beautiful day and as I waited for the folks running the show to open the gates, I enjoyed the greenery around me and the sound of the birds singing – until they got drowned out by the rumbling motors of dozens of vehicles coming in behind me! 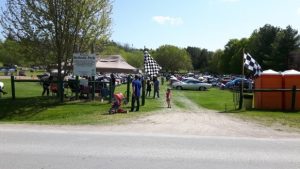 I managed to get a nice shady spot and set us up.  Lessa had a nice grassy spot near the fence and under some trees – where we were well shaded even into the noon hours.  After I got Ruth all freshened up, I went over and registered. 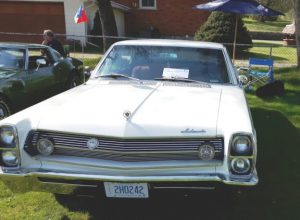 John Vander Meullen arrived around 10ish with his AMX and unfortunately, we were the sole reps for our car club – it being a very busy weekend for many. 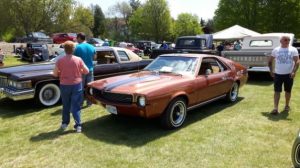 However, we enjoyed ourselves, wandered around and admired the over 200 cars on the show field. 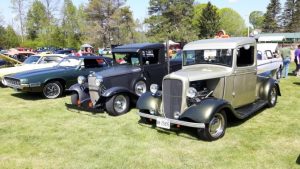 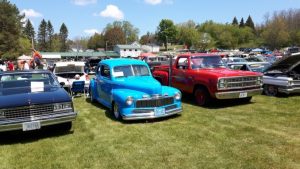 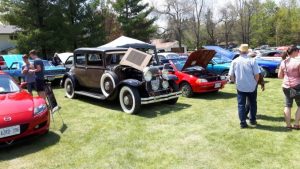 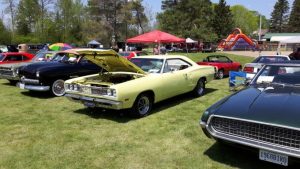 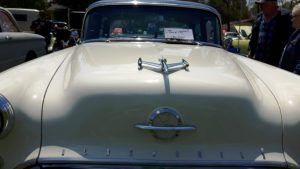 Then, there was this Studebaker Avanti, I forgot the year – but I believe this particular car was number 53 of 100 built that year! 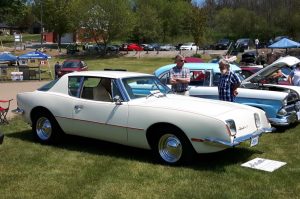 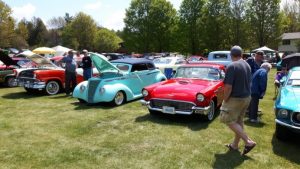 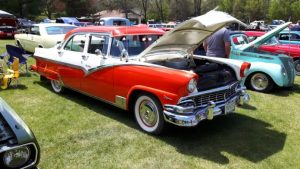 The paint job on this convertible was amazing – the owner called it the Wizard of Oz!  It sparkled in the sun – beautiful! 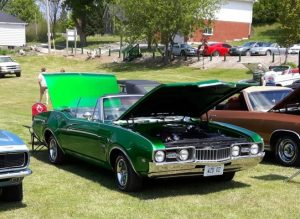 There was a good turnout of spectators and kids play area got lots of business as well!  I got a bite to eat at lunch and headed out about 1ish.  I think John was going to stay to the end but I still had ‘chores’ ahead of me and wanted to get them out of the way and enjoy the rest of the weekend.  It was a great car show and a wonderful way to start the season!

Sidebar – there were some folks walking around with pamphlets to upcoming car shows.  The two that I was interested it were – Wings and Wheels 2 Classic Car Show, July 24th, 10am to 4pm, at the National Air Force Museum of Canada Air Park, CFB Trenton.  I was told that a registrant could park their vehicles beside or under the wind of a vintage aircraft.  100{9bf56cdcf86fd5e484f7a6c7dd7f10c086072f0abab75d8e87856dbab1800b0f} of the proceeds go to benefit Quinte Humane Society and National Air Force Museum Foundation.    I am definitely going to try to make this one!

The other is Blackstock and District Lions Club Car Show, Sat, May 28 at the Nestleton Park, Nestleton, On, 9am to 4pm.