The sun didn’t shine like the weatherman promised but it was at least mild and the roads were clear.  The festivities were held in Milton at the home of Gary and Sonia Freelen.  We were to be there at 2pm.  I got there a little early and got a chance to visit with Sonia and Barb, as Barb and Harm had come down early so that Harm and Gary could put their heads together over AMO International stuff.

Sonia and Gary had their home decorated for the occasion.  Sonia collects Christmas village displays and figures etc.  She had a town all set up including a train and a dance hall!  Gary built a tunnel for the train to go thru, under part of the town.  It was beautiful! 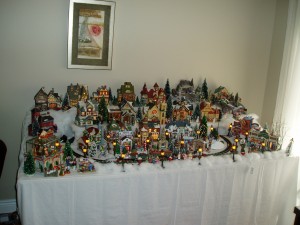 The rest of the club members, that had been able to attend, started arriving shortly after 2 and we all went downstairs to enjoy a glass or two and some great hors d’oeuvres – and catch up on each other’s lives.  We were 15 in total:  Gary and Sonia Freelen, Harm and Barb van der Veen, Mike and Gail Putz, Ken Edwards and Roberta Sommerville, Ken and Irene Perrier, Marty and Sandy Davis, Dave and Judy Everington and me.

Around 6 we all trooped upstairs and supper was serviced.  What a spread – ham, lasagna, veggies, mashed potatoes and salads!  The food was excellent and I must say the ham was ‘melt in your mouth’ good.  Then desert!!!  Black Forest Mouse, upside-down pineapple cake, cherry and minced meat pies – with whipping cream!  Mike was sitting beside me and he said:  “I hurt myself” while holding his stomach.  Well, I got the giggles, then he did and we laughed and laughed – and that hurt!  But it was such good food.

Several of us got together and cleaned up the kitchen, doing dishes and putting away food.  Then we all trooped downstairs again for the entertainment portion of the evening.  Secret Santa was the name of the game.  The way we played is we picked numbers, then the person with number 1 chose a gift, then person number 2 – who could either chose a new gift or steal from number 1 – who then had to chose another gift, then number 3 could either chose a gift or steal from 1 or 2 – and so on.  But you couldn’t open the gift!  So you were choosing by looks and feel only – and maybe a little shaking J  There were several gifts that were ‘fought’ over but the one that got the most laughs was in a cloth Santa bag and turned out to be a Christmas penguin – a double-wide bedroom slipper – to keep both feet warm while sitting.  Sonia won out after some hard-fought battles in which spouses played strategic parts. 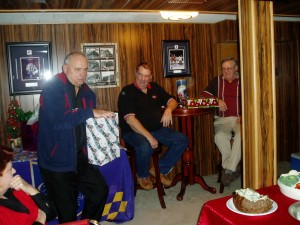 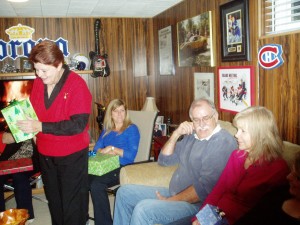 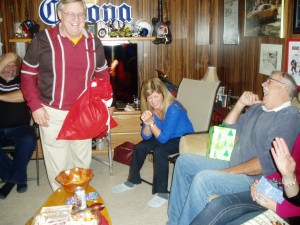 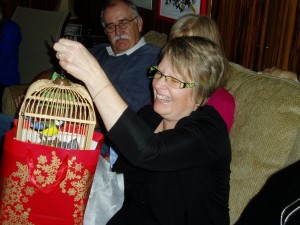 A little more visiting and we wrapped up the evening around 8pm, after exchanging warm and heart-felt best wishes for Christmas and the New Year.  Everyone made it home safe and sound, except I hear Gary stubbed his toe!!  Another successful AMO Plus Christmas Party!

Special thanks to Gary and Sonia for hosting and Best Wishes to all our present and missing members for a Merry Christmas and the a Happy and Healthy New Year!