The first part of this story can be found on the website for those who haven’t read it. For those that have, you’ll remember that we left off with a primed car ready for block sanding and an engine being built.

Well, I block sanded the entire car and then Harm came and primed again after I had filled all the little dips and doodles. And of course I block sanded again. Once I finished sanding, which took a couple of days, I invited Gail to come out and have a look. Well, it turns out that her eyesight (somewhat comparable to an eagle) is far better than mine. We went around the car together and she pointed out numerous spots where there appeared to be tiny pin holes in the primer, some that I couldn’t even see with my glasses on.

The only way I could get rid of them was to sand them out which I did, bringing Gail back out to inspect the car only to find a few that I missed. I must have sanded for a week. Then Harm came back and primed again. I sanded again, and Gail found pin holes again. So I sanded for another week or so. By this time, I was seriously thinking of not inviting Gail out to inspect again, and Gail was seriously thinking of never coming into the workshop again J, but it was what it was and it needed to be right.

After some thought and discussion, Harm and I realized that we were probably getting water in the compressor line, so we installed additional filters prior to priming again.

I sanded again (no more pin holes) and continued the process of inspect, sand, fix, review and sand for what seemed like about two months. I was doing that for so long (getting good at it though), that Ken Edwards gave me the nickname of “Dusty Putz”.

Anyway, we finally got it block sanded and it was ready to have the bottom, engine bay and door jams painted. 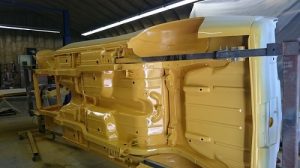 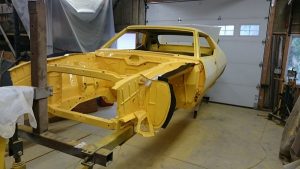 Which as you can see, has been done and she was ready to go. After that it would head over to Harm’s place for final sanding and final painting.

But first, we had to install the rear end so we could roll it out. It includes 4:11 gears, differential locker, Control Freaks suspension and Wilwood disc brakes. 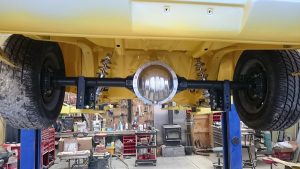 As for the engine, it was ready for the dyno, something you don’t get to do every day. Harm and I and my nephew Randy headed down to see Joe Fioravanti, (another relative) in Niagara who built my 360 Stroker. After a few runs on the dyno, we were at 503HP and 510 FPT. Man, were we happy with that! Harm and I gladly took the engine home and later, I proceeded to install a very nice serpentine system.

The engine is an AMC 360 Stroker with a 390 crank shaft, custom cam, solid lifters, Edlebrock aluminum 390 heads, MSD Fuel Injection and a March Performance Serpentine system. Obviously I don’t have any more kids to put through college….. 🙂 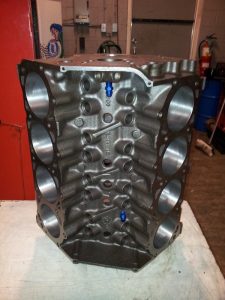 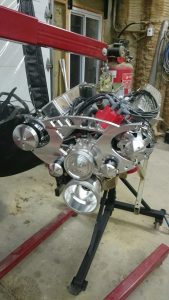 So, engine and transmission, and front suspension system are ready for installation……

As of today, January 7th, the body is over at Harm’s to be painted tomorrow. Gail and I are in Myrtle Beach for the next 3 months resting up for the future install.

We’ll do another update as progress is made.