Defined as “advance” or “move forward”.

Since we’re all in the antique/classic car business I thought it might be interesting to see what transformations and improvements were applied to a particular type of automobile over a 28 year period.  As we know, your car doesn’t become a “classic” until after you’ve sold it.  In this case, I chose a 1951 Nash Rambler and a 1979 Spirit.  Nash car styling seems to have been dominant after the merger with Hudson in 1954.  The 1961 Rambler American definitely shows Nash parentage, with slightly higher hemlines.  High sheet metal , narrow windows…a style resurrected by designer Ralph Gilles and applied to the “new” Chrysler 300 - Kind of an “anti” Pacer design.  I picked the Spirit to avoid any influence Renault might have had after the partnership in 1980. 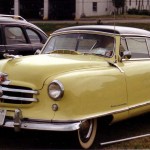 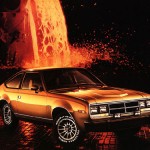 Progress is not always linear. Medicine is still trial and error. Every generation thinks it’s smarter than the last one. Why suffer through long economic depressions when all you have to do is print money; and who ever thought we could cure debt with more debt. Why didn’t they think of that in 1929!?!  Several years ago severe rains washed out numerous bridges in France. The ones built by the Romans 2000 years ago were still standing. French engineers were dispatched.

On the bright side, mechanical technology is fairly progressive. We improve. It’s rumoured the human race gets periodic IQ upgrades from an external source (hard to believe); but  the auto industry does receive periodic inspiration from the land of the rising sun, the home of Octoberfest and the country that gave us the Pony.  Sorry England, that was then.

Those surveyed really liked the car.  One owner was amazed by the power at his disposal.  Records don’t show if he lived long enough to test a Rambler Scrambler.  Another said he liked the leg room and believed that a Rambler owner can put his legs in twice as many positions as the driver of a Cadillac.  This particular aspect would definitely appeal to the younger, unattached crowd.   A Californian wrote…”what I like is that I can comfortably push the car by hand with little effort, which means if I ever run out of gas on a level road I can easily move it two or three miles without getting tired.  Hey, try that with your Ford Explorer!  The Nash weighed in at 2480 lbs compared to the “heavy“  cars at the time, such as the full sized Nash Ambassador at 3400 lbs.

The small trunk was a negative and the emergency brake handle tended to slide up your trouser leg when entering the car, clothing styles being what they were.  One very positive gentleman wrote at the conclusion of a long gripe about a howl in the rear end...”maybe I’ve got a lemon but it’s still a fine car.”  Poor radio reception was also a problem particularly when you couldn’t use it to drown out the accompanying howl.

Given  AMC’s financial position in 1979, they didn’t have a lot of money to spend on developing all new cars.  Having pioneered the economy-subcompact thing in North America, the foreigners had pretty much stolen the show.   The Spirit was described as a tried and true Gremlin reposing under a slick new interior.  The GT package was mostly visual.  It got you a tach and “deep tone“ exhaust with the four speed.  The meaning of the term “GT” had become somewhat “diluted” -  as I once a owned a 16 hp Sears “GT” lawn tractor which also had a “deep tone” exhaust, mainly because it was non-existent.  The car’s interior got high marks for looks and comfort.

Complaints included a centre armrest that interfered with shifting, understeer and a two barrel Ford carb that strangled the 304 to the point that , despite its 5G redline, it was all over by 4000 rpm.  It was rated at 125 hp.  You might say it lacked “spirit”.  For all you Spirit owners out there, perhaps a 1969 Z28 302 engine would be a good transplant.  In all fairness there was a lot on pressure by auto insurance companies to discourage high hp performance vehicles.  Witness what happened to the Mustang after 1973.  The “new “ GTO became a Nova with stripes.  It was however described as the best AMC small car to date.

What’s been written so far doesn’t really tell us much about “progress”.  I’ve been comparing apples to oranges or “spirits” to apparitions.  The Spirit was the recipient of an overhead valve engine which greatly increased combustion efficiency, complete with thin wall casting which reduced weight.  It used an alternator instead of a generator, the latter pretty much limited your electrical supply.  A twelve volt upgrade from six.   AC increased creature comfort.  Permanent ethylene glycol coolant and a fixed thermostat increased gas mileage, combustion efficiency and heater capability. Radial tires and improved suspension geometry enhanced handling. Multi-grade oils reduced the change interval, non-leaded gas increased spark plug length and more corrosion resistant metal - the life of the exhaust system.  Electronic ignition did away with periodic contact point/condenser replacements, tune-ups and made for more reliable winter starting.  Better rubber and synthetic fibers extended the life of rad hoses and drive belts.   Modest pollution controls (compared to today) cleaned up the exhaust.