The day promised to be hot and sunny, and it didn’t disappoint! The convoy to Orillia started at 6:30 a.m. at the farm of Barb and Harm’s. Ken and Roberta arrived in Roberta’s Pacer and Jodee, who had stayed overnight, drove her Ambassador. Given the road construction, Harm and Barb chose a different route which was very scenic, not only for us but the local wildlife. As we approached one of a number of osprey nests, one of the birds poked his head up out of the nest and you could just imagine what he was saying: “Hey, Larry, there’s three AMCs! Boy, they’re pretty rare birds now eh?” The route brought us driving under one of two lift locks in Ontario just outside of Kirkfield. (Note: If you’ve never experienced going through the lift locks, you can always take a small cruise in Peterborough, the other lift lock location. These locks were built over 100 years ago!). We ran into quite a bit of fog so that slowed us down a bit but we were still able to make the downtown in good time at 7:30 a.m.! By that time, over 200 cars had already arrived! Thanks to Marty, we had our traditional spot on Peter Street just off the main street where he had saved seven spots! Marty (this year’s Best in Show for Limited Class of Bricklin – congratulations!) had driven his Bricklin to ensure the rest of us would be all lined up together. In addition to our cars, Sandy drove her 1987 Eagle station wagon; Ken and Irene in their AMX; and Gary and Sonia in their Ambassador. A good showing for the club!

More and more show quality cars/trucks arrived, completely filling the downtown streets and parking lots! Orillia has so much to offer in the way of restaurants, shopping, etc., not to mention the many street performers brought in to entertain the crowds! It was a party that lasted all day! Again, thanks to Marty and Sandy, they made reservations at Brewery Bay Pub for lunch (hard to get 15 people seated together) and we enjoyed some cold beer, good food and air conditioning while we caught up on each other’s lives. Roberta did her best to walk around town after having part of her big toenail removed the day before. What a trooper!

A pot luck barbecue at Marty and Sandy’s topped off the day! Thanks again you two for opening up your home after a long, hot day and providing delicious hamburgers/hot dogs! That first cold beer under the shade in their back yard was unforgettable, as was the rousing “Happy Birthday” song for my birthday (two weeks early) and cupcake with candle (sorry about your shirt, Roberta!).

Ken and Irene decided to join our return convoy through the back roads (all paved) and, as we drove by those same osprey nests, I’m sure I heard one of them say, “Hey, Larry! There’s an AMX with those other AMCs!! That wasn’t with the other cars when they drove by this morning!” So, the moral of this story is…? Heck, there’s no moral! Just have fun with your cars wherever you go!! 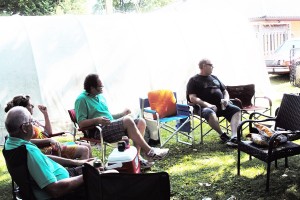 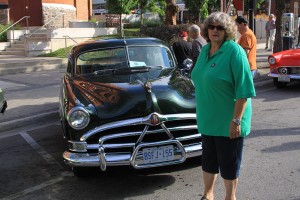 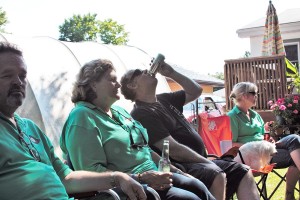