Seemingly stuck at Silver level, we decided to forego the 2006 convention in Dayton, Ohio, and instead spend the time, energy and money giving Zippy a fresh look. We decided to give Zippy a major, full-body restoration. This was body only, but complete disassembly, soda-blasting down to bare metal (over, under, around and through), patching rust spots, etc. When Zippy was stripped bare, we loaded his unit-body carcass onto our utility trailer and had Bobbie’s 1975 Pacer X haul him to the body shop along with all the assorted doors, hood, fenders, hatch, etc. still detached. The painting was done locally by a professional body shop, in Bobbie’s beautiful color choice of a misty green two-tone. The complete underside, inside floor wells, door insides, and roof underside was painted to match using a tint-able bed liner for sound and rust-proofing. While the body was disassembled and curing over the winter, I couldn’t resist cleaning and painting every little item, preparing for re-assembly in the spring.

Successfully re-assembled, we proudly drove Zippy to Denver, Colorado in 2007, where we won Junior Gold in AMC Non-Stock and advanced to Senior class with a near-perfect score, deducted only for the cracked windshield which I broke during installation and did not have time to replace. In 2008, we drove Zippy into Canada, to Kingston, Ontario, where we won Senior Gold and the Roy D. Chapin award, advancing to American Cup class.

Zippy won the AMO American Cup award in 2016 in Rockford, Illinois showing nearly 330,000 miles as he turns 39 years old, having never been towed to a show. It was the first and only time that Bobbie had not been with me at an AMO National.  Bobbie stayed home to care for Pegasus who died within a week of my return. Although we haven’t brought Pegasus with us for several years, people still ask about him. He was such a good traveler and will be missed. 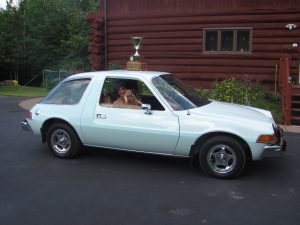